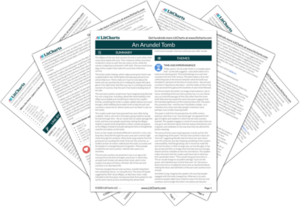 "An Arundel Tomb" was written in 1956 by the British poet Philip Larkin. It was included as the final poem in his 1964 collection, The Whitsun Weddings, and is also one of his best known works. In the poem, the speaker is looking at stone effigies of a medieval earl and countess. Surprised to see that they are depicted holding hands, the speaker sets off a complex meditation about the nature of time, mortality, and love. The tomb of the title refers to a real monument found in the Chichester Cathedral, which Larkin visited with his longtime lover Monica Jones before writing the poem. The poem is also essentially an example of ekphrasis—writing that focuses on a visual object or work of art. 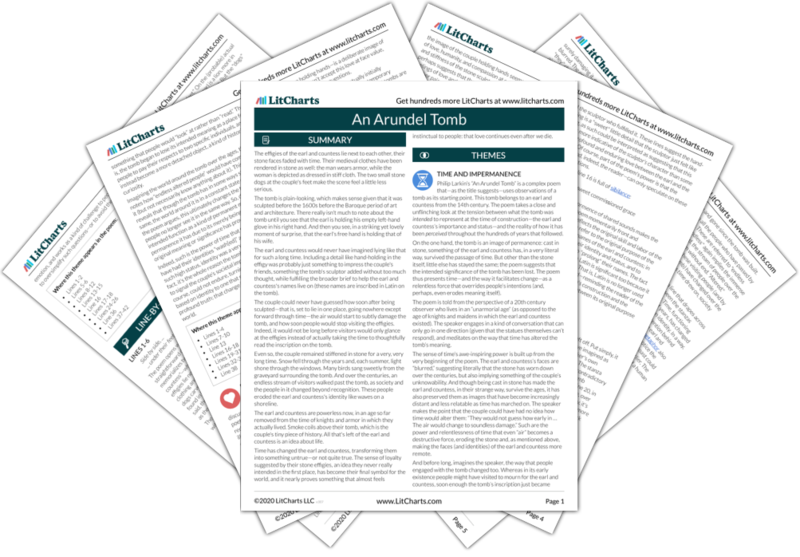 Get the entire guide to “An Arundel Tomb” as a printable PDF.
Download

The Full Text of “An Arundel Tomb”

The Full Text of “An Arundel Tomb”

1Side by side, their faces blurred,

2The earl and countess lie in stone,

5And that faint hint of the absurd—

6The little dogs under their feet.

7Such plainness of the pre-baroque

8Hardly involves the eye, until

9It meets his left-hand gauntlet, still

10Clasped empty in the other; and

11One sees, with a sharp tender shock,

12His hand withdrawn, holding her hand.

13They would not think to lie so long.

14Such faithfulness in effigy

15Was just a detail friends would see:

17Thrown off in helping to prolong

18The Latin names around the base.

19They would not guess how early in

21The air would change to soundless damage,

22Turn the old tenantry away;

24To look, not read. Rigidly they

25Persisted, linked, through lengths and breadths

27Each summer thronged the glass. A bright

28Litter of birdcalls strewed the same

29Bone-riddled ground. And up the paths

31Washing at their identity.

32Now, helpless in the hollow of

33An unarmorial age, a trough

34Of smoke in slow suspended skeins

35Above their scrap of history,

36Only an attitude remains:

37Time has transfigured them into

39They hardly meant has come to be

40Their final blazon, and to prove

42What will survive of us is love.

It gathers to a greatness, like the ooze of oil Crushed