Download this LitChart! (PDF)
Teachers and parents! Struggling with distance learning? Our Teacher Edition on The Boarding House can help.

Welcome to the LitCharts study guide on James Joyce's The Boarding House. Created by the original team behind SparkNotes, LitCharts are the world's best literature guides.

A concise biography of James Joyce plus historical and literary context for The Boarding House.

A quick-reference summary: The Boarding House on a single page.

In-depth summary and analysis of every of The Boarding House. Visual theme-tracking, too.

Explanations, analysis, and visualizations of The Boarding House's themes.

The Boarding House's important quotes, sortable by theme, character, or .

Description, analysis, and timelines for The Boarding House's characters.

Explanations of The Boarding House's symbols, and tracking of where they appear.

An interactive data visualization of The Boarding House's plot and themes.

Born in Rathgar, a village just outside central Dublin, James Augustine Aloysius Joyce was the eldest of 10 surviving children of a Catholic family. The family was prosperous for a while, and Joyce was sent to a prestigious boarding school, but he was withdrawn when his father’s drinking and financial carelessness drove the family to poverty. Nevertheless, Joyce went on to excel at a local Jesuit school and then studied languages, literature, and theater at University College, Dublin. After graduating, he moved to Paris with ideas of becoming a doctor, though he soon abandoned this plan in favor of literary pursuits. He returned to Dublin in 1903 because his mother was dying, but in late 1904, he set off for mainland Europe again, this time with his new partner, Nora Barnacle. The couple lived first in Austria-Hungary, and then in Trieste, Italy, where their two children were born. Joyce’s first book, Dubliners, was published in 1914, though Joyce had been writing the short stories it contained for a decade. Between 1914 and 1919, Joyce and his family lived in Zurich, having left Italy when the First World War broke out. In 1916, Joyce published his first novel, A Portrait of the Artist as a Young Man. Over the following years, the family would live in Trieste, Paris, and Zurich, while Joyce worked on and published his novels Ulysses (1922) and Finnegans Wake (1939), which established him as one of the world’s foremost avant-garde writers. He died in Zurich in 1941 at the age of 58, suffering from a perforated ulcer. Though Joyce had denounced the Catholic Church as a young man, many critics have observed that a Catholic spirit infuses much of his work.
Get the entire The Boarding House LitChart as a printable PDF.
"My students can't get enough of your charts and their results have gone through the roof." -Graham S.
Download 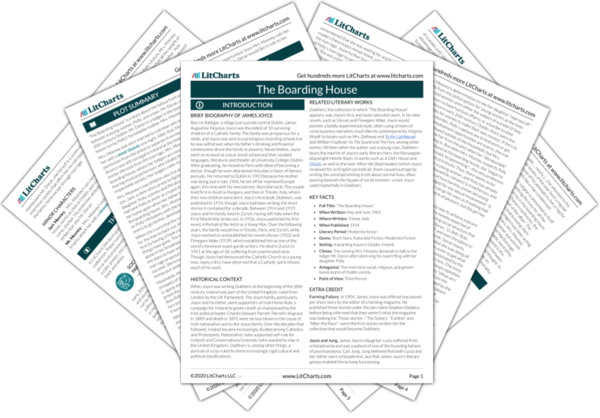 Historical Context of The Boarding House

When Joyce was writing Dubliners at the beginning of the 20th century, Ireland was part of the United Kingdom, ruled from London by the UK Parliament. The Joyce family, particularly Joyce and his father, were supporters of Irish Home Rule, a campaign for Ireland to govern itself, as championed by the Irish political leader Charles Stewart Parnell. Parnell’s disgrace in 1889 and death in 1891 were serious blows to the cause of Irish nationalism and to the Joyce family. Over the decades that followed, Ireland became increasingly divided among Catholics and Protestants, Nationalists (who supported self-rule for Ireland) and Conservatives/Unionists (who wanted to stay in the United Kingdom). Dubliners is, among other things, a portrait of a city ruled by these increasingly rigid cultural and political classifications.

Other Books Related to The Boarding House

Dubliners, the collection in which “The Boarding House” appears, was Joyce’s first and most naturalist work. In his later novels, such as Ulysses and Finnegans Wake, Joyce would pioneer a boldly experimental style, often using stream-of-consciousness narration, much like his contemporaries Virginia Woolf (in books such as Mrs. Dalloway and To the Lighthouse) and William Faulkner (in The Sound and The Fury, among other works). Written when the author was a young man, Dubliners bears the imprint of Joyce’s early literary hero, the Norwegian playwright Henrik Ibsen. In works such as A Doll’s House and Ghosts, as well as the later When We Dead Awaken (which Joyce reviewed for an English periodical), Ibsen caused outrage by writing the uncompromising truth about normal lives, often peering beneath the façade of social niceties—a tack Joyce used masterfully in Dubliners.
Key Facts about The Boarding House

Extra Credit for The Boarding House

Farming Failure. In 1904, James Joyce was offered one pound per short story by the editor of a farming magazine. He published three stories under the pen name Stephen Dedalus, before being informed that they weren’t what the magazine was looking for. Those stories—“The Sisters,” “Eveline,” and “After the Race”—were the first stories written for the collection that would become Dubliners.

Joyce and Jung. James Joyce’s daughter Lucia suffered from schizophrenia and was a patient of one of the founding fathers of psychoanalysis, Carl Jung. Jung believed that both Lucia and her father were schizophrenic, but that James Joyce’s literary genius enabled him to keep functioning. 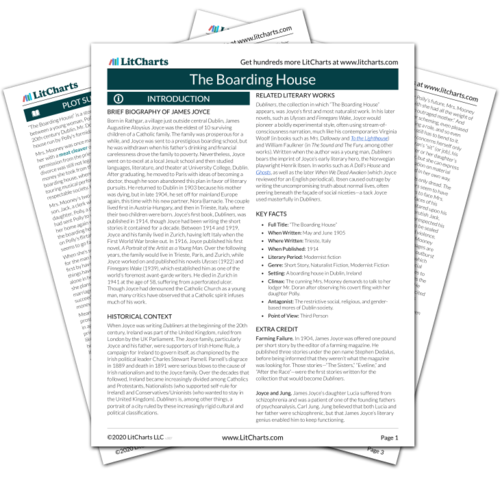 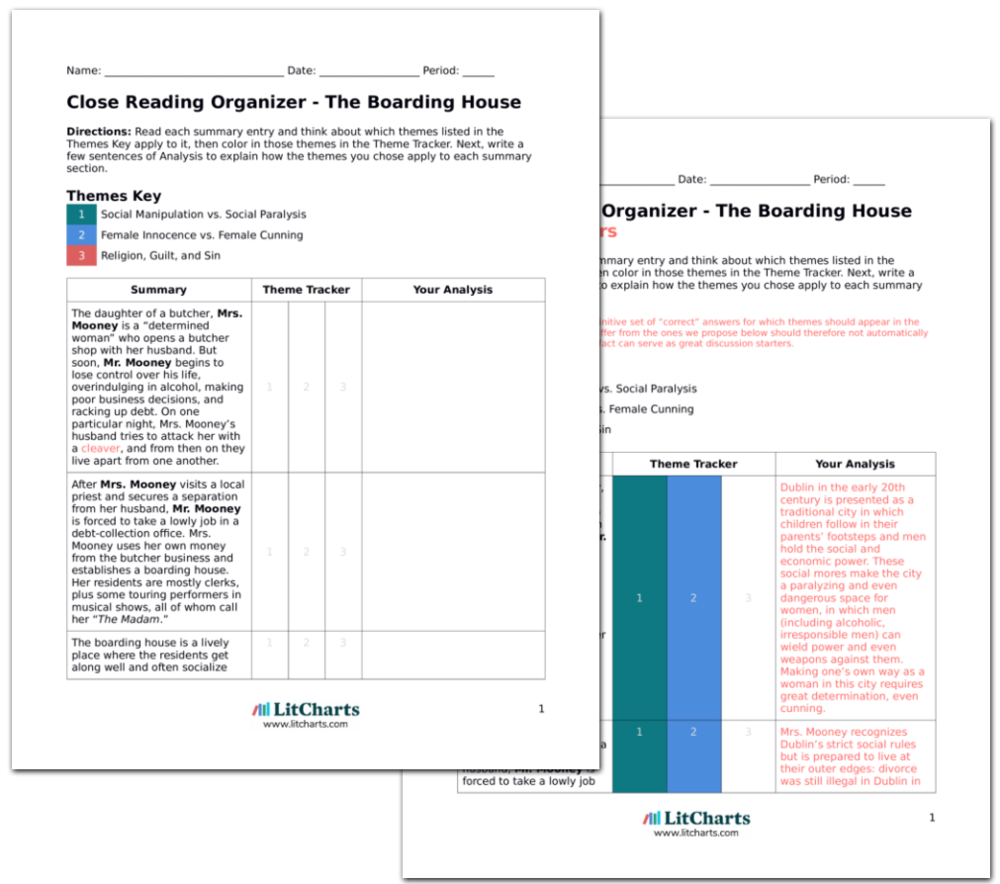