Download this LitChart! (PDF)
Teachers and parents! Struggling with distance learning? Our Teacher Edition on Boesman and Lena can help.

Welcome to the LitCharts study guide on Athol Fugard's Boesman and Lena. Created by the original team behind SparkNotes, LitCharts are the world's best literature guides.

A concise biography of Athol Fugard plus historical and literary context for Boesman and Lena.

A quick-reference summary: Boesman and Lena on a single page.

In-depth summary and analysis of every act of Boesman and Lena. Visual theme-tracking, too.

Explanations, analysis, and visualizations of Boesman and Lena's themes.

Description, analysis, and timelines for Boesman and Lena's characters.

Description, analysis, and timelines for Boesman and Lena's terms.

Explanations of Boesman and Lena's symbols, and tracking of where they appear.

An interactive data visualization of Boesman and Lena's plot and themes.

Fugard was born in South Africa in 1932 to English and Afrikaner parents. In 1935, his family moved to Port Elizabeth, South Africa. He studied philosophy and social anthropology at the University of Cape Town, but dropped out before his final examinations. He then spent two years working in East Asia on a steamer ship, where he began writing. In 1956, he married and had a daughter. He moved to Johannesburg, South Africa, in 1958, where he worked as a clerk in a Native Commissioners’ Court, which made him very aware of the injustices of apartheid. He began writing plays to expose those injustices, and also created a multiracial theater. He debuted many plays, including Boesman and Lena, and also performed the works of other major playwrights with a group called the Serpent Players, a group that consisted largely of black men. He continued to perform with them through the 1970s and early 1980s. Following the dismantling of apartheid in 1990-1991, Fugard focus turned increasingly to his personal history in his writing. Fugard has written over 30 plays, and in 2011 was awarded a Special Tony Award for Lifetime Achievement in the Theatre. In 2012 he relocated to South Africa, where he now lives permanently.
Get the entire Boesman and Lena LitChart as a printable PDF.
"My students can't get enough of your charts and their results have gone through the roof." -Graham S.
Download 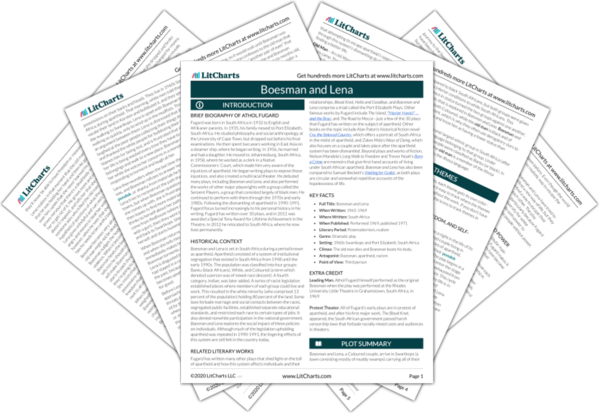 Historical Context of Boesman and Lena

Boesman and Lena is set in South Africa during a period known as apartheid. Apartheid consisted of a system of institutional segregation that existed in South Africa from 1948 until the early 1990s. The population was classified into four groups: Bantu (black Africans), White, and Coloured (a term which denoted a person was of mixed-race descent). A fourth category, Indian, was later added. A series of racist legislation established places where members of each group could live and work. This resulted in the white minority (who comprised 13 percent of the population) holding 80 percent of the land. Some laws forbade marriage and social contacts between the races, segregated public facilities, established separate educational standards, and restricted each race to certain types of jobs. It also denied nonwhite participation in the national government. Boesman and Lena explores the social impact of these policies on individuals. Although much of the legislation upholding apartheid was repealed in 1990-1991, the lingering effects of this system are still felt in the country today.

Other Books Related to Boesman and Lena

Fugard has written many other plays that shed light on the toll of apartheid and how this system affects individuals and their relationships. Blood Knot, Hello and Goodbye, and Boesman and Lena comprise a triad called the Port Elizabeth Plays. Other famous works by Fugard include The Island, "Master Harold" … and the Boys, and The Road to Mecca—just a few of the 30 plays that Fugard has written on the subject of apartheid. Other books on the topic include Alan Paton's historical fiction novel Cry, the Beloved Country, which offers a portrait of South Africa in the midst of apartheid, and Zakes Mda’s Ways of Dying, which also focuses on a couple and takes place after the apartheid system has been dismantled. Beyond plays and works of fiction, Nelson Mandela’s Long Walk to Freedom and Trevor Noah’s Born a Crime are memoirs that give first-hand accounts of living under South African apartheid. Boesman and Lena has also been compared to Samuel Beckett’s Waiting for Godot, as both plays are circular and somewhat repetitive accounts of the hopelessness of life.
Key Facts about Boesman and Lena

Extra Credit for Boesman and Lena

Leading Man. Athol Fugard himself performed as the original Boesman when the play was performed at the Rhodes University Little Theatre in Grahamstown, South Africa, in 1969.

Protest Theater. All of Fugard’s early plays are in protest of apartheid, and after his first major work, The Blood Knot, appeared, the South African government passed harsh censorship laws that forbade racially mixed casts and audiences in theaters. 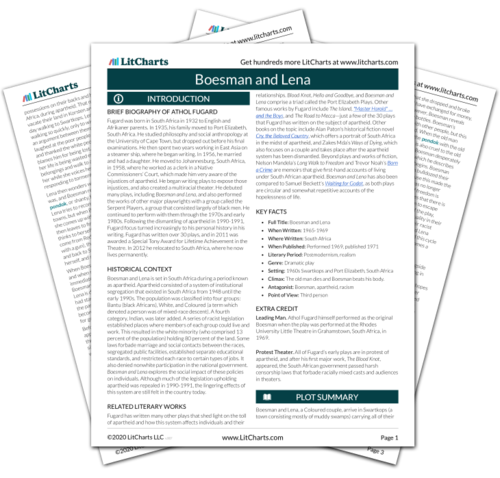 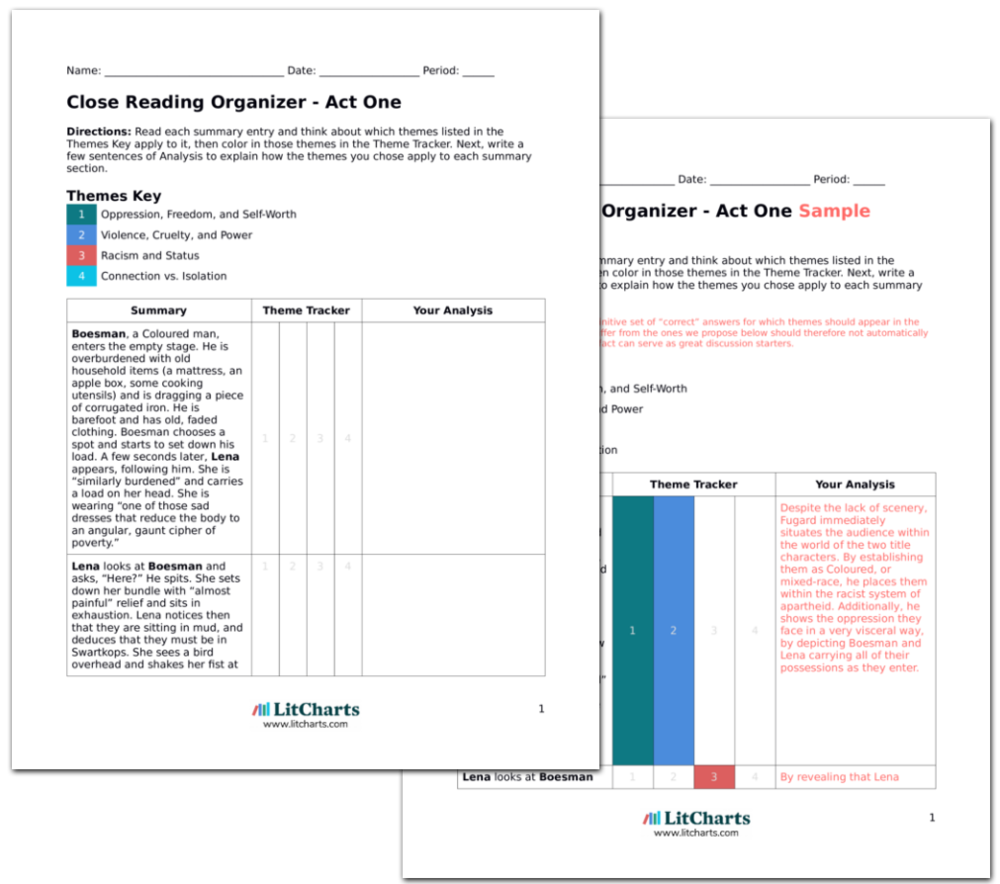