Download this LitChart! (PDF)
Teachers and parents! Struggling with distance learning? Our Teacher Edition on American Born Chinese can help.

Everything you need
for every book you read.

"Sooo much more helpful than SparkNotes. The way the content is organized
and presented is seamlessly smooth, innovative, and comprehensive."
Get LitCharts A+
Get LitCharts A+

A concise biography of Gene Luen Yang plus historical and literary context for American Born Chinese.

A quick-reference summary: American Born Chinese on a single page.

In-depth summary and analysis of every chapter of American Born Chinese. Visual theme-tracking, too.

Explanations of American Born Chinese's symbols, and tracking of where they appear.

Yang’s parents, like Jin’s in the novel, emigrated to the United States as college students and met in the San Jose State University library during their time in graduate school (though Yang draws on details like this from his own family history, American Born Chinese isn’t autobiographical). His parents encouraged him to get a college degree in something practical, despite Yang’s intense love of comics and his desire to be an animator for Disney. He received a degree in computer science from the University of California, Berkeley. Though Yang worked as a computer engineer for several years, he ultimately decided that teaching was his calling and began teaching computer science to high school students. In the mid-1990s, he began self-publishing his own comics, all of which were well-received. Though American Born Chinese is his most famous work, he also wrote the series Avatar: The Last Airbender for Dark Horse Comics, as well as a Chinese character featured in DC Comics’ New Superman. Yang is vocal about the educational value of comics and graphic novels. During his master’s degree, he created an online comic to teach students math. American Born Chinese is also influenced greatly by Yang’s Christian beliefs, which manifest as the very Christian God-like figure of Tze-Yo-Tzuh.
Get the entire American Born Chinese LitChart as a printable PDF.
"My students can't get enough of your charts and their results have gone through the roof." -Graham S.
Download 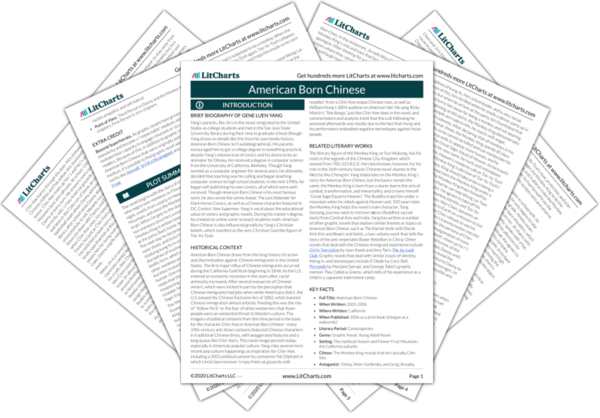 American Born Chinese draws from the long history of racism and discrimination against Chinese immigrants in the United States. The first major influx of Chinese immigrants occurred during the California Gold Rush beginning in 1848. As the U.S. entered an economic recession in the years after, racial animosity increased. After several massacres of Chinese miners, which were incited in part by the perception that Chinese immigrants had jobs when white Americans didn’t, the U.S. passed the Chinese Exclusion Act of 1882, which banned Chinese immigration almost entirely. Feeding this was the rise of “Yellow Peril,” or the fear of white westerners that Asian people were an existential threat to Western culture. The imagery of political cartoons from this time period is the basis for the character Chin-Kee in American Born Chinese—many 19th-century anti-Asian cartoons featured Chinese characters in traditional Chinese dress, with exaggerated features and a long queue like Chin-Kee’s. This racist image persists today, especially in American popular culture. Yang cites several more recent pop culture happenings as inspiration for Chin-Kee, including a 2001 political cartoon by cartoonist Pat Oliphant in which Uncle Sam receives “crispy fried cat gizzards with noodles” from a Chin-Kee-esque Chinese man, as well as William Hung’s 2004 audition on American Idol. He sang Ricky Martin’s “She Bangs,” just like Chin-Kee does in the novel, and commentators and analysts insist that the cult following he amassed afterwards was mostly due to the fact that Hung and his performance embodied negative stereotypes against Asian people.

The literary figure of the Monkey King, or Sun Wukong, has his roots in the legends of the Chinese Chu Kingdom, which existed from 700-223 B.C.E. He’s best known, however, for his role in the 16th-century classic Chinese novel Journey to the West by Wu Cheng’en. Yang elaborates on the Monkey King’s story for American Born Chinese, but the basics remain the same: the Monkey King is born from a stone; learns the arts of combat, transformation, and immortality; and crowns himself “Great Sage Equal to Heaven.” The Buddha traps him under a mountain when he rebels against Heaven and, 500 years later, the Monkey King helps the novel’s main character, Tang Sanzang, journey west to retrieve sūtras (Buddhist sacred texts) from Central Asia and India. Yang has written a number of other graphic novels that explore similar themes or topics to American Born Chinese, such as The Eternal Smile with Derek Kirk Kim and Boxers and Saints, a two-volume work that tells the story of the anti-imperialist Boxer Rebellion in China. Other novels that deal with the Chinese immigrant experience include Girl in Translation by Jean Kwok and Amy Tan’s The Joy Luck Club. Graphic novels that deal with similar issues of identity, fitting in, and stereotypes include El Deafo by Cece Bell, Persepolis by Marjane Satrapi, and George Takei’s graphic memoir They Called us Enemy, which tells of his experience as a child in a Japanese internment camp.
Key Facts about American Born Chinese

Beyond Superheroes. As graphic novels have grown in popularity and become a “respectable” medium, educators have realized their capacity to engage reluctant or struggling readers. Because of this, in addition to graphic novels like American Born Chinese that were originally published in the medium, it’s possible to find graphic novel adaptations of classic works like Beowulf, To Kill a Mockingbird, and The Diary of Anne Frank. 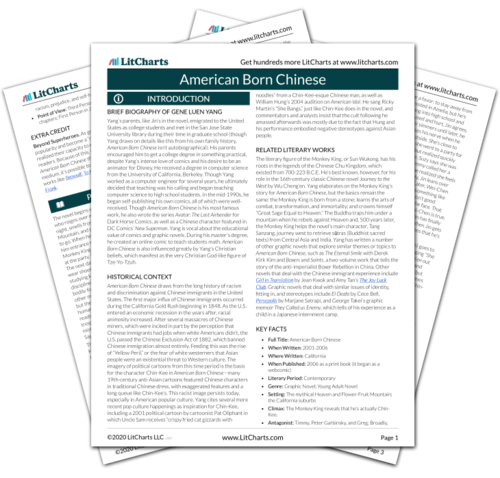 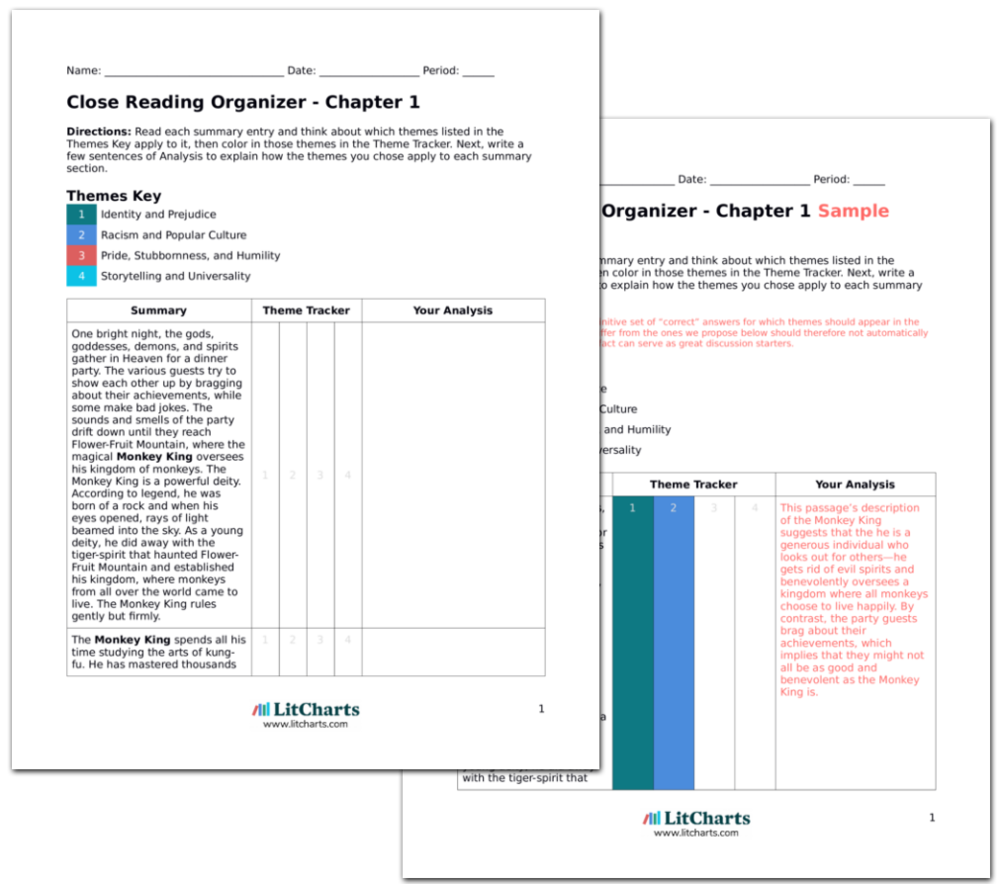