Download this LitChart! (PDF)
Teachers and parents! Struggling with distance learning? Our Teacher Edition on America Is in the Heart can help.

Welcome to the LitCharts study guide on Carlos Bulosan's America Is in the Heart. Created by the original team behind SparkNotes, LitCharts are the world's best literature guides.

America Is in the Heart: Introduction

A concise biography of Carlos Bulosan plus historical and literary context for America Is in the Heart.

America Is in the Heart: Plot Summary

A quick-reference summary: America Is in the Heart on a single page.

America Is in the Heart: Detailed Summary & Analysis

In-depth summary and analysis of every chapter of America Is in the Heart. Visual theme-tracking, too.

America Is in the Heart: Themes

Explanations, analysis, and visualizations of America Is in the Heart's themes.

America Is in the Heart: Quotes

America Is in the Heart's important quotes, sortable by theme, character, or chapter.

America Is in the Heart: Characters

Description, analysis, and timelines for America Is in the Heart's characters.

Description, analysis, and timelines for America Is in the Heart's terms.

America Is in the Heart: Symbols

Explanations of America Is in the Heart's symbols, and tracking of where they appear.

America Is in the Heart: Theme Wheel

An interactive data visualization of America Is in the Heart's plot and themes.

Carlos Bulosan was born in a rural farming village in the Philippine province of Pangasinan. His parents were members of the Ilocano ethnolinguistic group. Following centuries of Spanish colonialism, the Bulosans struggled to survive, as large-scale plantations consolidated their hold over peasant lands. Their poverty notwithstanding, Bulosan’s family emphasized the importance of education. Bulosan eventually saved enough money to secure steerage passage to America. He arrived in Seattle on July 22, 1930 at the age of 17. With only three years of formal schooling, Bulosan was broke and spoke no English, so he spent years working low-paying itinerant labor jobs in fields, orchards, hotels, restaurants, and factories. Like most Filipino people in America at the time, Bulosan experienced severe racial discrimination, but he found community with other Filipinos and joined the labor movement that fought to unionize ethnic workers on the Pacific Coast. He also taught himself English and pursued his lifelong passion for writing. In his short life, he wrote poems, short stories, journalistic pieces, and novels. His most famous work is the semi-autobiographical novel America is in the Heart (1946). Bulosan died from tuberculosis at the age of 42, and many of his other works were published posthumously. Today he celebrated as an early postcolonial chronicler of the Filipino experience in America.
Get the entire America Is in the Heart LitChart as a printable PDF.
"My students can't get enough of your charts and their results have gone through the roof." -Graham S.
Download 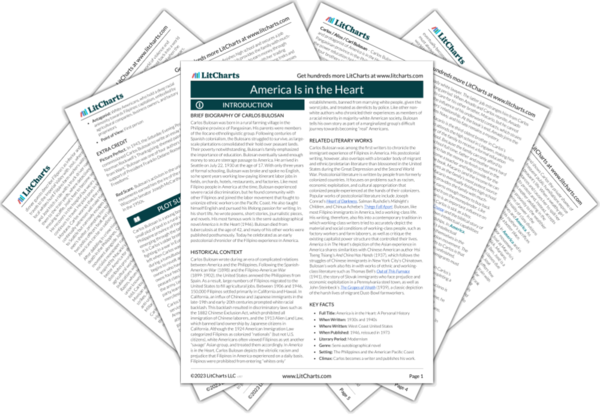 Historical Context of America Is in the Heart

Carlos Bulosan wrote during an era of complicated relations between America and the Philippines. Following the Spanish-American War (1898) and the Filipino-American War (1899-1902), the United States annexed the Philippines from Spain. As a result, large numbers of Filipinos migrated to the United States to fill agricultural jobs. Between 1906 and 1946, 150,000 Filipinos settled primarily in California and Hawaii. In California, an influx of Chinese and Japanese immigrants in the late-19th and early-20th centuries prompted white racial backlash. This backlash resulted in discriminatory laws such as the 1882 Chinese Exclusion Act, which prohibited all immigration of Chinese laborers, and the 1913 Alien Land Law, which banned land ownership by Japanese citizens in California. Although the 1924 American Immigration Law categorized Filipinos as colonized “nationals” (but not U.S. citizens), white Americans often viewed Filipinos as yet another “savage” Asian group, and treated them accordingly. In America is in the Heart, Carlos Bulosan depicts the vitriolic racism and prejudice that Filipinos in America experienced on a daily basis. Filipinos were prohibited from entering “whites only” establishments, banned from marrying white people, given the worst jobs, and treated as derelicts by police. Like other non-white authors who chronicled their experiences as members of a racial minority in majority-white American society, Bulosan tells his own story as part of a marginalized group’s difficult journey towards becoming “real” Americans.

Other Books Related to America Is in the Heart

Carlos Bulosan was among the first writers to chronicle the immigrant experience of Filipinos in America. His postcolonial writing, however, also overlaps with a broader body of migrant and ethnic/proletarian literature than blossomed in the United States during the Great Depression and the Second World War. Postcolonial literature is written by people from formerly colonized countries. It focuses on problems such as racism, economic exploitation, and cultural appropriation that colonized people experienced at the hands of their colonizers. Popular works of postcolonial literature include Joseph Conrad’s Heart of Darkness, Salman Rushdie's Midnight's Children, and Chinua Achebe's Things Fall Apart. Bulosan, like most Filipino immigrants in America, led a working-class life. His writing, therefore, also fits into a contemporary tradition in which working-class writers tried to accurately depict the material and social conditions of working-class people, such as factory workers and farm laborers, as well as critique the existing capitalist power structure that controlled their lives. America is in The Heart’s depiction of the Asian experience in America shares similarities with Chinese American author Hsi Tseng Tsiang’s And China Has Hands (1937), which follows the struggles of Chinese immigrants in New York City’s Chinatown. Bulosan’s work also fits in with works of ethnic and working-class literature such as Thomas Bell’s Out of This Furnace (1941), the story of Slovak immigrants who face prejudice and economic exploitation in a Pennsylvania steel town, as well as John Steinbeck’s The Grapes of Wrath (1939), a classic depiction of the harsh lives of migrant Dust-Bowl farmworkers.
Key Facts about America Is in the Heart

Extra Credit for America Is in the Heart

Red Scare. Bulosan’s activism in the union and socialist movements earned him the ire of the rabidly anti-communist Wisconsin Senator Joseph McCarthy, who blacklisted Bulosan in the 1950s. 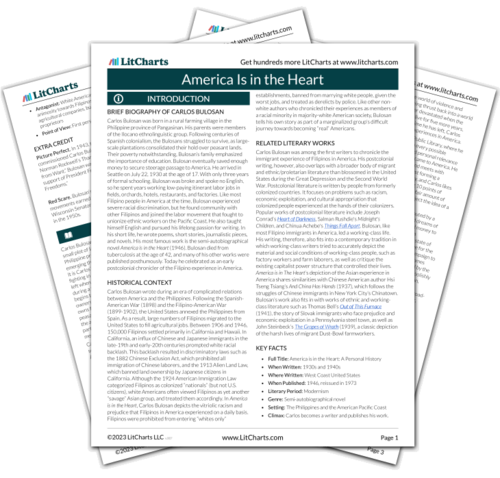 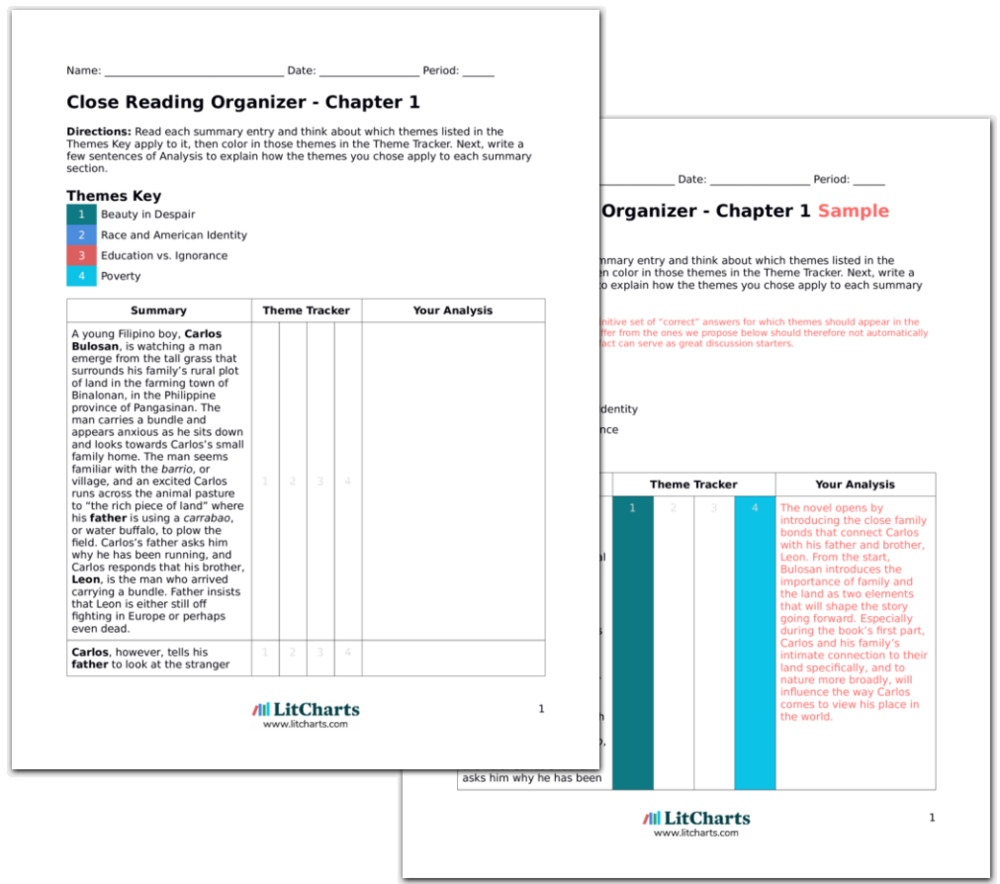